Sam Pasley shares his first season as a beekeeper with Three Peaks:
The season that’s just ended was my first with Three Peaks and it was a massive learning curve for me. I gained new skills and knowledge everyday working in the field.
There is so much to learn in beekeeping as every hive is different. In spring when we’re going through 80-120 hives a day and preparing them for honey flow in December, we get to see and learn from different hive situations. Spring was definitely where I learnt the most about the beekeeping side of things.

It’s fairly normal during the harvest season for us to be starting work at 4am and finishing around 6pm. Lots of moving hives into Manuka sites in this period of the year, this involves early starts and late finishes with lots of time on the road. We drove to Whanganui loads of times to visit our sites down there which is a 4-5 hour drive each way. The photo of the sunrise with Ruapehu and Tongariro is on one of our last trips down there to bring the hives home to their wintering sites after the honey flow was over.

My team consists of myself and Rommel who is my team leader. He is the one who has to coordinate where we need to be and what tasks we need to be doing in a certain order. If this gets delayed or takes longer than expected due to weather or unexpected events (getting stuck on one of the 4wd access Manuka sites) we have to work until the job is done to avoid being held up again the next day or pushing things out further which could mean missing some of the flowering. Although there’s just two of us in our team, when we need it we can call on other teams in Three Peaks to help out.

During harvesting all teams helped each other to harvest the large amounts of honey. This made things a lot easier than it would’ve been if everyone just kept to their teams. It also meant the 4 Three Peaks branches all got to work together and I got to meet a lot of the other beekeepers in the company. Now that our hives are all back up in Hamilton we have been focusing on feeding them up before winter and treating them for any disease or infection that could happen over that winter period too. It’s nice that everything has settled down a bit since honey flow but there’s still work to do in the shed like cleaning gear etc. so everything runs smoothly for next season. 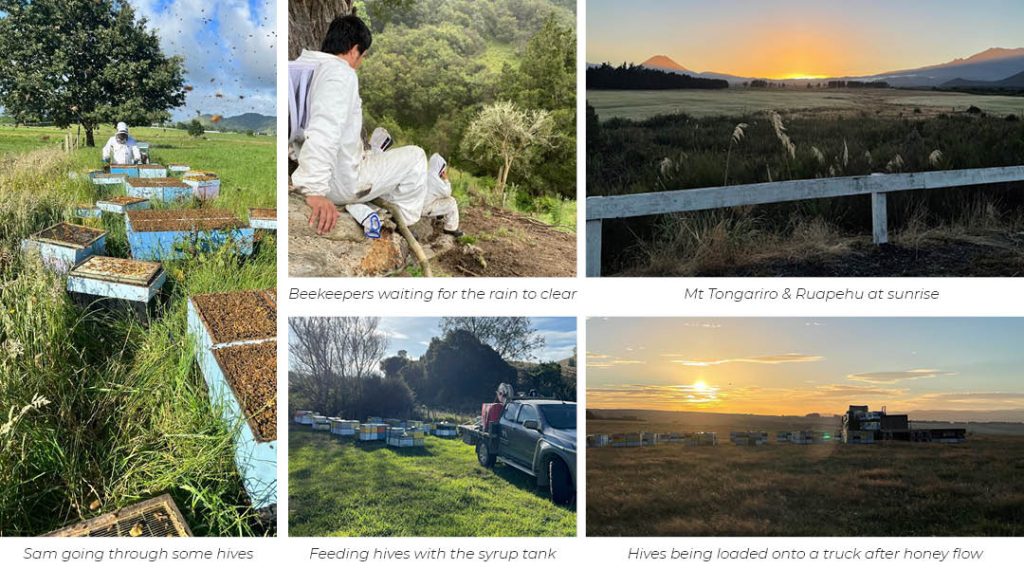